The vertical farming industry will likely in turn ultimately enable NASA and other space programs to realize their future food production systems on the Moon, Mars and even beyond. 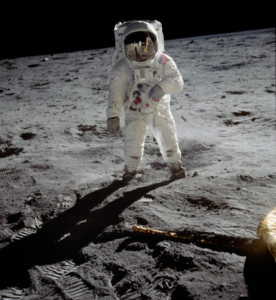 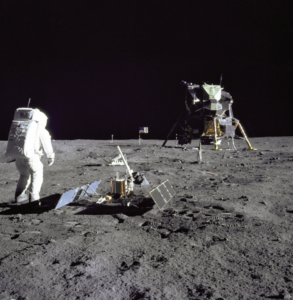 As the 50th anniversary of Apollo 11’s first Lunar landing and moonwalk on 20 July 1969 is observed this year, it is fitting to recall the myriad innovation spinoffs that NASA’s space program had gifted mankind, ranging from the integrated circuit to computer microchips to satellite television to cordless tools to electric vehicles to freeze-dried food to memory foam, etc. — and yes, still unbeknown to many, vertical farming. 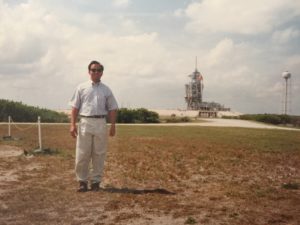 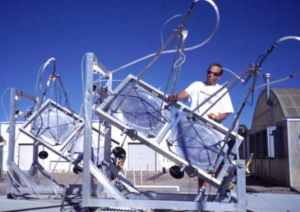 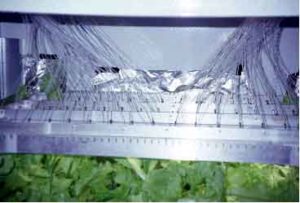 The author’s NASA-sponsored project on design and demonstration of NASA’s first Hybrid Solar and Electric Lighting System for Bioregenerative Space Life Support for application in future long-duration manned missions to the Moon and Mars.

While the Apollo program itself did not initiate or develop space farming, its unparalleled success directly led NASA to establish around 1978 the Controlled Ecological Life Support System (CELSS) division within its Advanced Life Support program with the aim in part of developing the technologies and strategies necessary to grow food and regenerate resources on the Lunar surface or on Mars for future long-duration manned missions and habitation.

Nearly two decades before NASA, however, the then Soviet Space program commenced activities beginning in 1961 toward developing its own bioregenerative space life support system. In 1968, the Soviets first realized growing crops in their completely sealed controlled-environment system Bios-2, based in the Siberian city of Krasnoyarsk, wherein they sucessfully cultivated wheat, carrots, cucumber, dill and other vegetable crops. (Bios-2 should not be confused with Biosphere 2 in Arizona which was constructed much later between 1987 and 1991.) An improved underground test facility, Bios-3, was subsequently built by the Soviets in 1972.

Fast forward to the 1980s and 1990s, NASA’s CELSS program made significant advances in the cultivation of a whole range of crops in closed controlled-environment systems under optimized environmental conditions of lighting, temperature, relative humidity, air flow, nutrient compositions, etc.

The foregoing advances by both NASA and the Soviet Space program paved the way for the emergence of the first commercial vertical farms (or plant factories) in the United States and Japan. General Electric’s Geniponics based in New York and Alaska as well as General Mills’ Phytofarms of America in Illinois were established in the 1970s and operated through the 1980s though eventually closing down owing to economic challenges.

It was in Japan in the 1980s, however, when the pioneering vertical farming industry truly took root and flourished in part through their proactive adoption and incorporation of emerging technology innovations. For instance, TS Farm (Q.P. Corporation) was first in employing the aeroponic system, while Cosmo Plant Co. Ltd. in 2000 became the world’s first commercial LED-based vertical farm and began producing up to 7,000 heads of lettuce per day, significantly exceeding the industry norm of 3,000 to 5,000 heads of lettuce per day in the 1990s.

Vertical farming today, of course, has gone global and, in parallel with advances in lighting technologies, climate control, data analytics, automation and other innovations, has correspondingly been setting new achievements in both yield and resource sustainability.

And just as the space program spun off the Vertical Farming industry, there is poetic justice in the very real prospects that it will be the vertical farming industry that will ultimately enable NASA, as well as other space programs, to develop and fully realize its bioregenerative space life support systems for future Lunar and Martian human habitats.

Just as Elon Musk’s Space X, Jeff Bezos’s Blue Origin and Richard Branson’s Virgin Galactic have partnered with NASA to innovate on and advance space transportation, it is highly likely that partnerships with NASA for the design and operation of its future Lunar and Martian space farms will be brokered with the likes of AeroFarms, Plenty, Bowery Farming, Crop One Holdings, Gotham Greens, Infarm, AEssense and/or other vertical farming companies, some of them have yet to be formed.

In the future the vertical farming industry may indeed extend its prospects from the mere terrestrial to the extraterrestrial.

A Journey Through the World Supply Chain with IFCO SYSTEMS